I am officially out of control on the Christmas crafts this year. This probably has something to do with my excitement to decorate combined with my lack of access to my decorations which happen to be in my storage room. So, I set out on an epic journey to the local craft stores in search of cheap craft supplies to make Christmas decorations. I officially scored (though admittedly some weren't so cheap), and now that the crafting marathon hubbub is starting to subside, I can share with you some of the fun things I made.

I found a few cute patterns and decided to finally "hook" them up. The first was a snowflake table runner which I downsized to a large doily:

Next, I worked on a poinsettia which I hoped would be a set of ornaments but was too floppy. After finally weaving in all the ends I just put it in the middle of the doily for lack of a better place to put it, and it seems to have found a happy home:

I also found a neat Christmas tree garland pattern on Ravelry but didn't have access to the magazine. I was too excited to wait so I just used the idea as an inspiration to invent my own version. Here are my pre-garlanded trees:

I attempted to felt them but only made them fuzzier, then I attached them together with a chain. I mounted the garland on the mantle where they were a bit lonely for a while until I discovered a neat knitter/crocheter wreath idea with fake yarn balls on the Jo-Ann website. I used that idea to make yarn ball ornaments with the leftover garland yarn and some bells and voila - a more social garland:

Using that same yarn ball idea with an unsavory yarn that I didn't quite enjoy crocheting with, I made another ornament but this time for the real tree:

I found a fancy flower arrangement idea, but simplified to this quick, easy, cheap version: just a glass vase with pinecones and one clump of fake poinsettias. I added the elephant ornament photo not because I made it but because I thought it was so cute (thanks, World Market!): 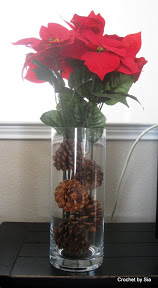 This was another great idea from the Jo-Ann website - a cinnamon stick votive holder. I didn't have enough sticks to cover the back of the glass, but I prefer it that way since more light can escape. I use the LED tea lights so that I won't have anxiety attacks about potential fire hazards.

Finally, a good old grapevine wreath is quick and easy (especially when all the ingredients are on sale). I need to re-do the ribbon since it looks a bit jacked up:

At last, a complete Christmas-y mantle with the mysterious head of Palenque watching over all (see Why I like being a slow Ironman). He actually was quite handy when I needed something to hammer in the pins holding up the garland.