I’ve been thinking about Lance Armstrong for a while now. When the USADA report was finally made public, I think at least I was in shock. I was also distracted. Or maybe easily distracted by the follies of presidential politics and other world news. It’s easy to not face a difficult situation when you can joke about binders full of women. It’s avoidance. I’ve been avoiding facing the situation head-on because it’s hard for me to process both intellectually and emotionally. I’m ready to face it now.

Yes, Lance Armstrong is or was one of my heroes. It’s not really clear anymore. The jury is still out.

First off, I’m struggling with a new dimension in the field of good versus bad. You see, we used to say good and bad is not always black or white, but some shade of grey. That analogy doesn’t work anymore. I think we’ve either discovered a new color wheel or a 4th dimension where you can be in more than one place at one time. I’m trying to understand how a person can be so wholly wrong in one area of life and so wholly good in another.

I don’t believe in weighing one area of his life versus another. One man’s gain does not justify another man’s suffering. The ends do not justify the means. However, I wonder some if part of his relentlessness in the fight against cancer was due to a deep-seated guilt, maybe not even on a conscious level, of the pain that he caused other people in the world of cycling. Would we have had some of the great strides in patient support and erasing the stigmas of cancer if it weren’t for Lance’s ego, Lance’s cycling success, Lance’s celebrity appeal, and possibly Lance’s internal guilt?

Team doping Lance and LIVESTRONG Lance sound like two completely different people, but they are one and the same. I’m not angry at him, but I am deeply sad. Deeply sad about what will become of his legacy, what his children and family have to deal with right now, what all the cyclists who felt pressured to dope or maintained silence for so many years have to deal with.

Long-term, hopefully Lance will open up to talk about what happened. I truly want to understand how he got to the point where he was not only using performance enhancing drugs, but pushing his teammates to as well. I don’t want to know in order to blame anyone else. I want to know to better understand the human psyche and how we make mistakes like this. Was it a “tyranny of incrementalism”? One of my business school professors, Stephen Kaufman, used this phrase to describe how good people slowly, in small increments, start moving away from their moral centers until all of a sudden they are at the center of a massive Enron-like scandal.

One of my favorite lectures in business school was on a very similar topic – Clayton Christensen told us about his own experience in wrestling with a decision that could compromise his personal integrity. He was on his university’s basketball team, and they made it to the championship tournament which was scheduled for Sunday. For him, Sunday is the Sabbath and he committed to not play basketball on Sundays. It was a difficult choice with pressure from his coach and team, but he came to the conclusion that maintaining his commitment was more important than a single game. Maintaining that line in the sand was a tough decision at the time, but I bet it made all the rest of his decisions easier. He has since written a book aptly entitled How Will You Measure Your Life? and you can read more about it in this HBS Working Knowledge article.

How many of us are certain that we would draw the line somewhere before we end up crossing it? I definitely race on Sundays. What do I definitely not do? It’s easy to say now that I definitely don’t dope, but I recognize that there has to be several steps before we get to that point, one of which is being close enough to have a shot at winning (something I don’t have which also makes any decision leading up to doping easier for me). It’s easy for us to pretend like we would never be doping ringleaders, but are we really sure that we would say no when asked to try it the first time? To say no when we’re about to start the Tour de France? To say no to an organized scheme with doctors? To say no when some of our new teammates ask questions? At what point does it become easy to exit once you enter the tyranny of incrementalism? Never.

Maybe Lance has a fixed mindset. If you haven’t read Carol Dweck’s book about Mindset, you should. It has a great chapter on sports and the mindset of a champion. I actually read it in relation to my work in public education, but it is also so very relevant to how we approach both sports and personal integrity. In our culture, we are so caught up in the idea of natural talent that the pressure moves those with a fixed mindset to do anything to not appear like they are failures. I have a hard time believing this is the case with Lance because even though I know now that he doped, I also know that he is an incredibly hard worker, and he sustained success over such a long period of time (albeit unfairly). I can’t imagine someone working that hard who believes that we have finite abilities pre-destined by our genetic background. But maybe it had some role in pushing him into doping if he couldn’t bear to lose to other dopers.

Do I think anyone can draw the line and still achieve success in the area of their chosen passion? It looks like the answer is no, at least not in the face of a brutally unforgiving sport with officials turning the other way when the majority of its athletes were taking performance-enhancing drugs. One new hero is the cyclist that wouldn’t compromise his values (I forgot his name, which is like a sad reinforcing joke). The NY Times ran an article a week or so ago about him – he didn’t cave to the pressure, but he also wasn’t able to follow his passion. He quit cycling. Once we have gone down the wrong path, can we pull back and start to make the change for good? I think the answer is yes, even though the road would be rough. I look at baseball and see athletes who eventually started freely admitting that they took PEDs and know that they were wrong. The weight was lifted, people were able to move on, and (hopefully) improvements were made to detect abusers.

It’s not my place to judge – I will leave that to God. But I continue to feel sad for the teammates, for the sport, for Lance and his family, for LIVESTRONG, and for people suffering from cancer. Just reading about the regret in his teammates’ statements makes me feel sad. I do forgive Lance, but I’m also not one of those suffering the most. I’m not a part of any of those people I just listed. My only hope is that the victims will get catharsis, that LIVESTRONG will continue to provide a great service to cancer patients and will continue to have legions of supporters, that the sport of cycling will be cleaned up, and that the ecosystem that allowed this to happen will no longer exist. 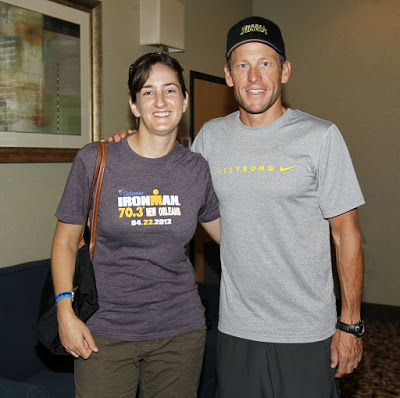